What do these have in common?  Nothing except enumerating my weekend’s activities.

Friday, we went with some friends to the Men’s NCAA Gymnastic Team Finals.  Not because we’re huge gymnastics buffs or anything but because we figured it would be something fun to do, and how often do you get to attend the NCAA finals in any sport?  Michigan was defending their 2013 team championship title, and they didn’t disappoint, winning again this year.

The whole thing was an interesting event held at the Crisler Center, where they also hold men’s basketball.  They had draped off the upper deck so it wasn’t sold out, but it was still pretty packed, and those fans are LOUD!!!  We were sitting near the Stanford cheering section who were deafening, as well as the almost equally rowdy Cal section, even though Cal wasn’t competing for a team championship; they just had a handful of gymnasts competing individually.  Shockingly, when we got home, our ears were ringing as if we’d just been to a rock concert.  Ugh.

Also, note to self, perhaps bring one of those dust/hygiene masks next time – the chalk dust floating through the air was intense.  It almost looked cloudy from afar, and everything was covered with fine white powder by the time we left.

These dudes had orange shower slippers..Illinois I think. 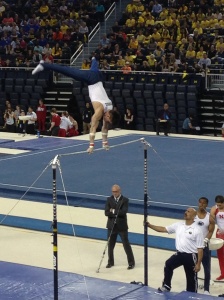 Penn State on the Horizontal Bar.  They came in last, and by the end, I felt like they were hanging their heads and not really even trying…awkward.  Surprisingly the Big 10 Conference had the most schools represented between University of Michigan, Penn State, Ohio State, Illinois, Iowa, and a few individual participants from Minnesota and Nebraska.  I’m not sure why the Big 10 takes their gymnastics so seriously, but I guess once one school does, they all do, and clearly they are quite good.  I gotta say though, I felt like Michigan made it look pretty easy as compared to some of the other schools.

There was even a Michigan storm trooper cheering. 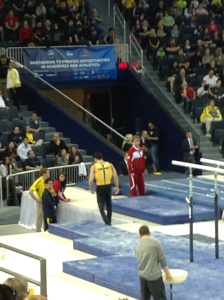 This guy from Iowa has the biggest back muscles I’ve ever seen in person.  It looks like he has pillows stuffed in there.  Even though it’s more grainy, can we just zoom in on this a second? 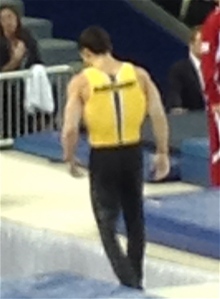 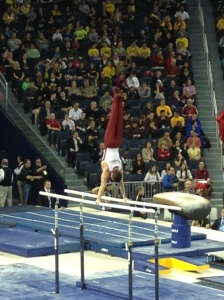 Parallel bars look really painful.  When they land on the undersides of their upper arms…ouch! 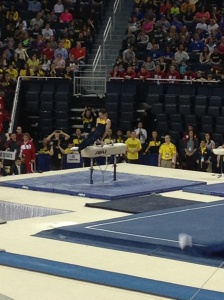 Michigan dominated on the pummel horse.

UMich’s Sam Mikulak came in first all around.  Way to go UMich – two in a row!

Saturday, we went with our new friends, fellow Ann Arbor blogger, The Winegetter, and his wife, to downtown Detroit to check out Cliff Bell’s and find some Thai food. 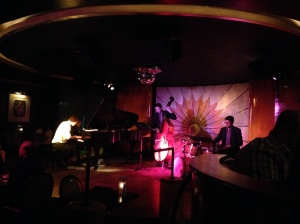 Cliff Bell’s is a dark and cozy jazz bar which opened in 1935.

A nice little jazz trio to warm up the evening, and I love this art deco backsplash lit up in pinks and purples.

The club was one of John Clifford Bell’s many bars/clubs that he opened during and after Prohibition.  It was closed from 1985 until 2005 when it was renovated and reopened.  Some interesting features include little cocktail tables attached and jutting out at intervals from the bar itself and the fact that the building was designed by Albert Kahn.  Albert Kahn was a renowned architect of the late 19th and early-mid 20th centuries, who is credited with designing many many buildings in Detroit and the environs, including University of Michigan in Ann Arbor, and according to Wikipedia, is sometimes called “the architect of Detroit.”  Fun fact: his dad was a rabbi. 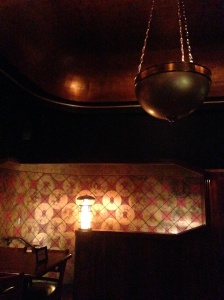 The dark gilded interior.  The ceiling is domed and painted a deep copper color that almost looks like mahogany and softly reflects the light.

After cocktail hour we exited, blinded by the fact that it was still light out, and headed to Bai Mai Thai, located barely two miles from Cliff Bell’s, still technically in downtown Detroit, but really in a seedy Dollar Store strip mall.  No matter that it smelled a bit funny and none of the empty tables had been bused since the last diners, our food was actually really tasty.  We’d been hard pressed to find good thai food in Ann Arbor, since the fast-casual chain No Thai seems to dominate the Yelp ratings, so it was a pleasant surprise to find that this was a pretty good version of drunken noodles and peanut curry (I may have even been convinced to try making curry whereas I have always shunned its coconut creaminess in the past).  We did, however, discover that those two were the better of the four dishes ordered that evening.  Good to note for later.

What with the weather being nice, it was good to get out and do some fun Ann Arbor and Detroit activities this weekend.

Monday, I made my first solo-attempt at cooking Passover Seder for Mark and me.  I made (way too much) roasted sweet potatoes, roasted asparagus and charoset (apples, walnuts, wine, dates) and gathered the ingredients for the Seder Plate (I even roasted the hard boiled egg, which was impressive since I never make eggs of any kind).  I also made a yellow Passover cake from a box with chocolate frosting which tasted a little weird (as many Passover desserts do) but good nonetheless.  The only thing I fudged was the roasted chicken which I bought pre-made at the supermarket.  Somehow it was actually cheaper than buying a raw chicken and roasting it myself, so why wouldn’t I?

I even broke out the good china, which I believe was my great grandmother Hannah’s.  Mark and I did the Seder readings ourselves, but we skipped the actual singing of songs since that would entail a solo on my part and chose instead just to read the lyrics.  Overall it was pretty successful if I do say so myself!!  Imagine my horror to wake up on April 15th to this wintry mess: