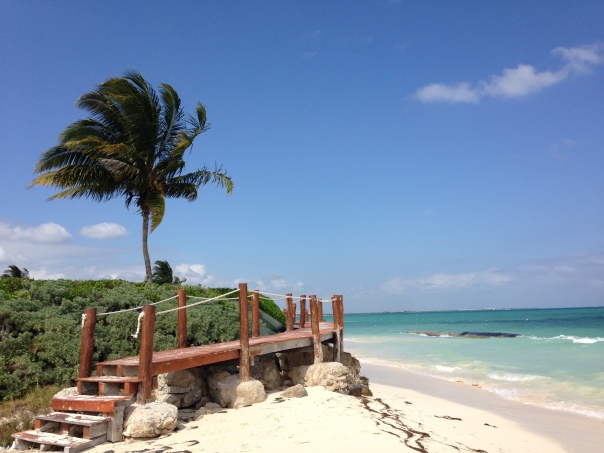 Not necessarily thinking through the idea of going to Mexico during Spring Break season, we descended upon Riviera Maya for a long-weekend escape from the Midwest cold. Luckily, most rowdy Spring Breakers park their butts immediately in Cancun where the airport is, rather than make the hour drive down the coast to Riviera Maya/Playa Del Carmen where we were.

We stayed at the very lovely Fairmont Mayakoba, where we were surrounded by the family Spring Break set, as well as a surprising number of conference travelers (who could actually be considered a bit rowdy). I’ve done my fair share of corporate conference travel and it’s funny to be on the outside looking in on that dynamic.

We did a lot of lounging by the pool and on the beach.  An amazing breakfast buffet was included in our room rate so we gorged early and held out for dinner.  Great green juice, omelets, Mexican classics and tropical fruits. 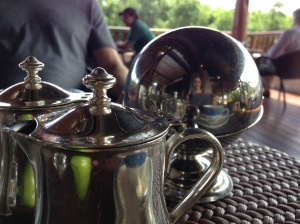 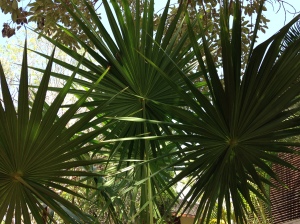 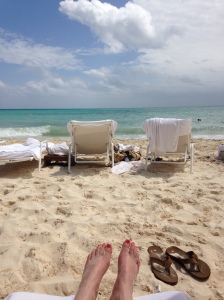 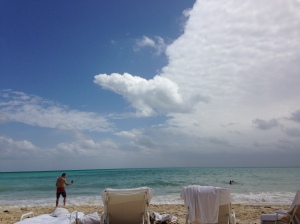 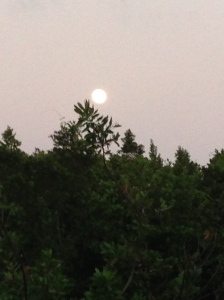 The Mayakoba area consists of three hotels and a golf course on the property.  There are man-made canals running between the properties, and you can take a ferry to get back and forth, or you can just take the ferry to explore the wildlife. 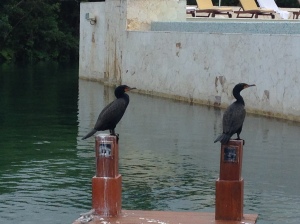 Crocodiles!  There was a woman sunbathing on her hotel room’s porch not 100 feet away. 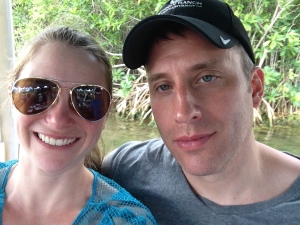 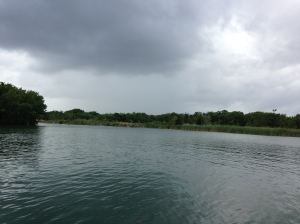 Upper left: roll with butter wrapped in a corn husk

Lower right: cochinita pibil – Mayan-style pork – so delish with pickled onions.  We had this for many meals, including breakfast.  Basically a yummy pulled pork dish.  Also, there were tons of various salsas everywhere which are always fun to try, from tomato-based, to habanero, onion and tomatillo.

In town, there were lots of beautiful wares being sold, like these sinks. 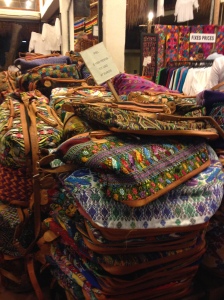 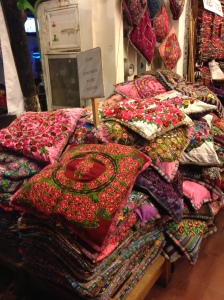 And these colorful bags 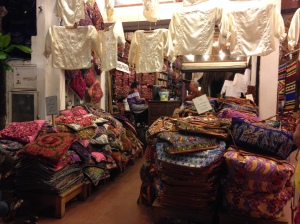 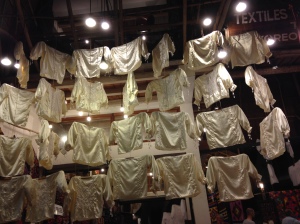 The street map was clearly geared toward tourists with the toucan.

Stopped at this tropical outdoor (but covered) bar for a pre-dinner beverage. 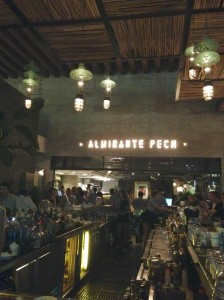 And this trendy outdoor (but again covered) bar for a post-dinner beverage.

Saw this band of wandering mariachis on both nights…wearing slightly different outfits each time.

One of the most fun and interesting things we did was a mezcal tasting at one of the other hotels on the Mayakoba property.  They had a sushi-tequila bar (actually probably a good combo when you think about it), where Mark and I tried 5 different mezcals from the same producer, Wahaka.  As I noted in my January Texas post, mezcal is another liquor made from the agave plant, but is smokier than tequila, more like scotch.

We had a perfect perch on a couch on the porch of the Agave Azul restaurant, overlooking the water and the full moon.

Our waiter, who administered the tasting, was super nice, mainly I think due to the fact that as he said, he “didn’t know many women that like mezcal.”  Because he was so excited to find people trying mezcal, he brought us a few small samples of other mezcals he thought we would like, including a mezcal-rita (margarita with mezcal), which I have to say, I enjoyed 10 times more than the one I had previously in Texas.

As we learned from our waiter and from the informational video he showed us, mezcal is much more diverse than tequila.  Yes, they are both made from agave, but whereas tequila is made only from one variety of the plant, mezcal can be made from many different types.  Additionally, the plants are smoked before being pressed to get the liquid, so that’s why mezcal has that smoky flavor and tequila doesn’t.  The plants can be smoked under wood, rocks, dirt, leather, etc., gaining different flavors in the process.  Mezcal is mainly produced in the state of Oaxaca, Mexico, which is an extremely poor region.

I recently figured out how to use this voice recording feature on my phone, so like the nerd that I am, I took some verbal notes on what we tried from Wahaka (I have no idea the names of each that we tried, so that’s useless, but at least to illustrate the range of flavors mezcal can give, and all from one brand, no less!):

1. Woody: Reminded me of a fire pit in New Mexico, toasting smores – made from the Espadin plant

4. “Ensemble” – a mixture of the first three essentially – smooth, smokey, herbaceous rather than floral

5. Most high-end…didn’t take any particular tasting notes but was definitely the least pucker-inducing of the Wahaka bunch

Extra: Amores (not Wahaka) which was our favorite of all for being smoky and smooth – also made from the Espadin plant

The other thing I kept noticing on this trip was all the fun and funky lighting fixtures wherever we went.  Somehow this sort of became an obsession, so here are a few of the good lighting shots (many were unusable given the photos were mostly taken at night…like of lanterns and such): 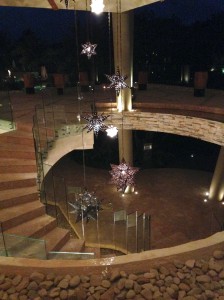 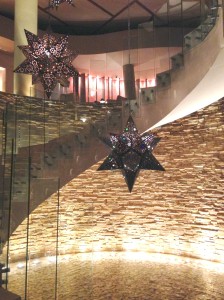 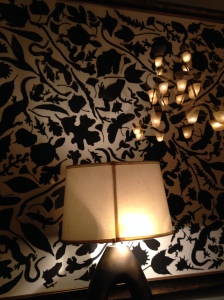 Pretty delicate paper cutting of plants and animals, and soft reflection of the chandelier in the glass. 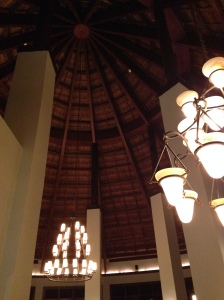 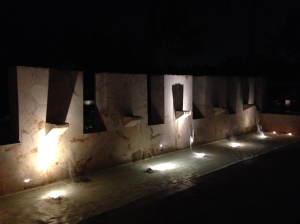 All around a wonderful getaway for relaxing and warm weather.