Down in Houston a few weeks ago, I got the urge to bake, so while my mom and sister were napping one afternoon, I drove over to Kroger and bought all the materials to make simple sugar cookies (plus some ice cream).

I was craving crispity crunchity sugar cookies, a la middle school recess snack, so after Googling “crispy sugar cookies” I landed on this easy-peasy recipe from Taste of Home.

Sugar cookies really are the best because they are generally so easy. This particular recipe calls for rolling out the dough super thinly and using a cookie cutter so that all the cookies are the same size, shape and cook evenly.

Me, being the lazy baker I am, decided against this method, and instead went with the Scoop and Pat Method (trademark pending…jk). This is where I 1. take a scoop of cookie dough from the bowl with a teaspoon, 2. pat the ball to flatten it between my fingers.

Being the sharp shooter that my sister is, she took that vanilla ice cream, spread it between two lopsided cookies, rolled the whole thing in rainbow sprinkles and BAM: delicious ice cream sandwich achieved!

Done and done. Now you go try the Scoop and Pat and let me know what you think. Be sure to pat as thin as possible to achieve that crunch!

I’m totally late to the party on this one: Espiral Vinho Verde.  It’s been written about on so many blogs and my friend, The WineGetter, has been talking it up ever since the thermometer got above 60.  So finally, I purchased a bottle to try.  It’s $4.49 at Trader Joe’s. Well that’s why I haven’t ever tried it!  I still have a hard time believing you can buy alcohol at Trader Joe’s and supermarkets and that you don’t have to go to the wine store.  Also, I never go to Trader Joe’s because I feel like I just end up buying sugary snacks masquerading as health food.

So anyway, onto the wine. 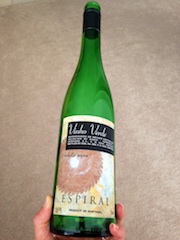 It was delicious!  It’s hard to go wrong with vinho verde I think in general.  It’s so light and refreshing, and sometimes, like this one, has a hint of effervescence such that it’s sort of like a wine spritzer.  At 9% ABV it’s not super strongly alcoholic, and it drinks crisply without an aftertaste.  Vinho verde, from Portugal, literally means green wine, and I think that’s an appropriate name for this bottle since it reminded me of tart green apples.  Vinho verde can be made from a blend of up to six grapes, but I couldn’t find out if Espiral was made from all six or just certain ones.  Does anyone know?

I highly recommend picking up a bottle if the Trader Joe’s near you sells alcohol.

Okay, on to some other treats.  It’s been a while since I’ve done any baking or dessert making, so I decided to do some of each this past week.  I made chicken ‘n’ biscuits and strawberry shortcake ice cream bars a la summertime ice cream truck (Good Humor?)…

The biscuits are super easy; my go-to recipe is here.  It doesn’t specify, so I use salted butter because I think it adds more flavor than unsalted butter which can be a bit bland…and I would end up slathering salted butter on them anyway once they’re ready.

I did Shake ‘n’ Bake chicken breasts (Mark likes the SnB…I think it’s okay…I’d never had it until he persuaded me to buy a box a few months ago).  We did different toppings like ketchup, pickles, hot sauce, pickled jalapenos and banana peppers. 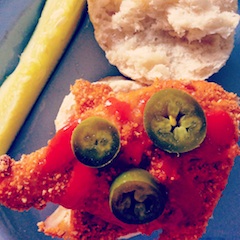 (These biscuits are also great for breakfast with butter…and maybe some honey? or maple syrup?)

The strawberry bar recipe was from The Chew on ABC here.  I skipped the corn starch because I didn’t feel like buying corn starch just for the two teaspoons it called for.

In tasting just the crumbly topping mix I wasn’t sure I was sold on the flavor matching that of those ice cream truck bars.  But once layered on the vanilla ice cream and strawberry sorbet, it really came together flavor-wise!

Everything was so delicious  – especially the biscuits right out of the oven.  It’s great what you can do with some flour and butter and not much else.

Next up: I’m going to try to recreate those crunchy chocolate bits in Carvel ice cream cake. If anyone else has other fun foods they want me to try to make, just comment here!