Yes, I realize that my wedding is a year away, but when it’s cold out, it’s fun to stay inside and do some wedding-related crafts (and cook some wintery meals).  All of the crafts and most of the foodstuff I’m detailing here is my first ever attempt at making them…You get a lot of take-out when both people are working.  Here’s the first wedding project I started (note “started” not yet finished):

Basically I’m using watercolors to paint these gift tags in ombre blue and then I’m going to write guests’ names on them, stamp them with table numbers and use them as escort cards.  Originally I tried to dip them into water mixed with paint, but that just made them soggy and didn’t impart enough color (I probably should have used ink instead of watercolor paint but it was too late, that’s what I had bought).  I moved on to using brushes to paint them, and I like how each is slightly different and looks handmade.

I saw these tissue paper tassel garlands on Instagram and decided that I could make them myself, so I purchased (and scrounged in my gift wrapping box) some tissue paper and Googled how to start.

(Picture from bridalmusings.com and garland made by Confetti System.)

They take a little while and some concentration, but now that I know I can do it, I’m going to buy some more tissue colors to make all sorts of combos.  One trick is to iron the sheets of tissue paper on low heat first so that the tassels don’t have crinkles in them.

Fold the tissue paper in half twice and cut strips leaving about an inch at the top.  Unfold once, cut the paper in half to create two tassels.  Unfold again so that you get this tentacle-looking piece, then start rolling tightly from one end in the middle all the way down the crease.  Once you get it rolled, you’ll have a tightly wound middle part with sprays of paper fanning out on either side.  Pinch the rolled middle part in half and start twisting like a twist tie so the tassel parts come together and you create the top part through which you can thread a string or ribbon.  Gently comb the strips with your fingers so that they fall nicely into tassels.

Then you can thread some sort of wire/thread/string/ribbon through the twisted top.  I tied a loose knot after passing through each loop to keep them spaced equally.  Hang on a window like this, on the mantle, or wherever else might be festive!

Here is another Thanksgiving-themed garland I put together.  Full disclosure: this was a cute little crafting kit that my aunt gave me for Hanukkah.  It did take some work in terms of cutting, pasting, creating paper leaves and tying the burlap ribbons into perfect bows.

It was super fun.

Making this necklace might not seem totally like a craft, but let me assure you that it took me at least three trips to Michael’s to purchase the correct clasp and clear plastic filament, so I think the effort exuded qualifies this as a legit project.  This peachy faux-pearl necklace was originally on cotton string and belonged to my grandmother Honey.  I was wearing it wrapped a few times around my wrist as a bracelet, when all of a sudden, the string broke and the beads rolled everywhere.  I swear, I didn’t even make any sudden movements – the string just disintegrated.  Coincidentally, this was during Friday night temple services that I was attending for Honey’s yahrzeit (remembrance of the anniversary of her death), and I was wearing it in her honor.  Embarrassingly crawling on my hands and knees to retrieve the errant beads around the pews and people’s legs, I stuffed them in my purse and vowed to restring them to make something wearable once again.  Although I don’t think I got quite all the pearls, it was fun parsing and arranging the ones I had collected in the correct order to remake the choker.

The necklace project got me excited to do more jewelry projects, and over Thanksgiving, I received some costume jewelry that belonged to Honey’s cousin, Janet, including many delicate metal and enamel flower brooches that I’m thinking of making into some sort of shadow box wall art.

In terms of cooking, I’ve been whipping up a storm of cookies and other cold weather treats.  A photo gallery of some of my faves so far:

Make your own pizza creations! 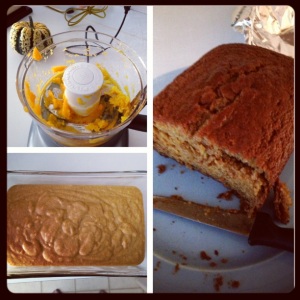 Pumpkin bread with pumpkin pulp that I roasted, scooped and pureed myself!  Look ma, no cans (of pumpkin puree)!

Roasted pumpkin seeds with butter and a lot of salt 🙂

Pumpkin chocolate chip cookies.  Okay, this time I had run out of hand-scooped pumpkin and did use the canned stuff. 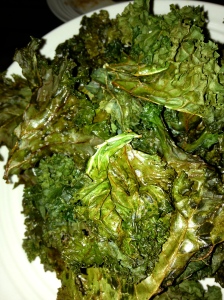 My new addiction is oven-roasted tomatoes.  Besides the fact that they take like 6 hours to bake, they are always a tasty addition to lunch and having the oven on all day helps keep me warm!! 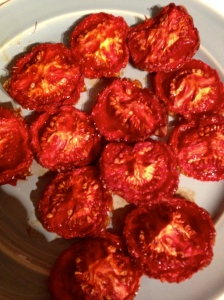 I’m chalking up my first attempt at Maryland crab cakes as an overall success: Pro: They tasted authentic with Old Bay; Con: They fell apart because I refused to use mayo and only used half an egg.  Also I used a container of jumbo lump crab meat, so the pieces were pretty large and chunky.  Maybe I should have shredded them up a bit so that they would mix better.

My Hanukkah latkes (potato pancakes) where more cohesive since I used the proper amount of egg:

They were excellent with hot sauce.
I made a traditional chicken soup, even making the broth from scratch with chicken thighs:

Then I made an even better spicy jalapeno chicken soup with quinoa, chicken bits pulled from one of those supermarket roast chickens and chicken broth.  It was quick and easy and what made it click was that you pour the soup out over the quinoa and chicken so that those ingredients don’t get soggy.  And then you can store each part separately, again to prevent the sog.

I had never roasted a whole garlic head before, but I did for this soup and it was DELICIOUS.  Just cut the top off the head of garlic, drizzle with olive oil, wrap in tin foil and roast in the oven.  When it’s done, you can gently squeeze the garlic cloves out into the soup.  I then put the broth and roasted garlic in the blender to puree the garlic and mix it in well.  (As an aside, I did two heads of garlic and saved the second one for garlic bread and snacks of garlic and roasted tomatoes on Kashi 7 grain crackers – yum!) 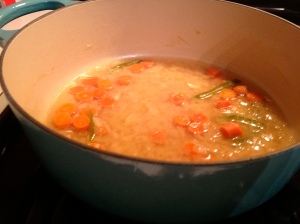 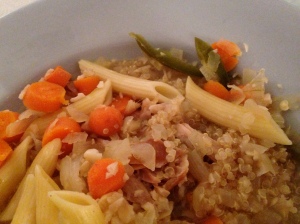 I threw in some leftover pasta too.  I really loved using a higher ratio of quinoa to soup so that each spoonful was a warm, slightly spicy, slightly nutty quinoa bite and not just straight chicken broth.
In addition to these traditional chocolate chip cookies (super chewy centers with extra crispy edges) (not the first time I’ve made these), I also made gingerbread men cookies (first time for these), which were easier than expected.  I got the hang of it on the second tray in that I rolled the dough a little thinner so they were more crunchy like a ginger snap, rather than bready like a cake. 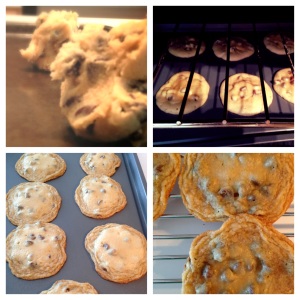 I also made some spiced walnuts with ginger and brown sugar. 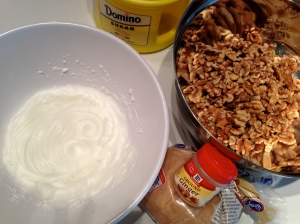 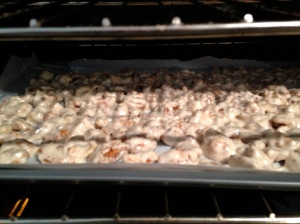 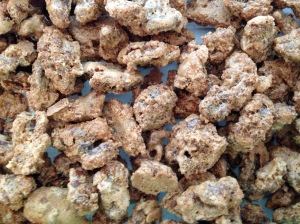 I am kinda obsessed with biscuits, and while I really do love those Pillsbury-from-a-can-biscuits (there are literally five to six layers you can peel back and put butter between), I wanted to see if I could make them myself.  In this six months of cooking and baking experimentation, I’ve gotten over the fear of doing things directly on the countertop.  I clean it down really well, flour her up, and roll out that dough, whether cookie or biscuit. 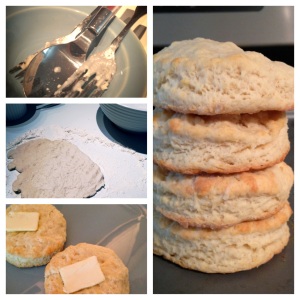 These were not only flaky but also a little crumbly.  Delicious for breakfast with butter and honey and for dinner with baked breaded chicken and hot sauce.
Yesterday I had a friend over and we each chose a cookie recipe to make.  I chose oatmeal toffee and she chose peanut butter Hershey kiss cookies.  They were both wonderful.  She not only used peanut butter, but also added ground peanuts to the mix which gave them a little salty-roasted taste and an added crunch mixed in with the smoothness of the peanut butter.

The toffee oatmeal cookies (with a smattering of Heath bar bits in addition to straight toffee bits) turned out soft in the middle with crispy-crumbly edges and texture coming from the chewy oatmeal and semi-melted bits of toffee.  This was also my first experience using coconut oil instead of butter in a 1 to 1 substitution.  Coconut oil is supposedly healthier than butter.  Since I’ve never made these particular cookies with butter, I have no basis for comparison as to whether the coconut oil altered the flavor at all, but they were light and delicious to me.

Along the way, I also made some oatmeal, chocolate chip, walnut, dried cranberry cookies.  Those were intense because the “extra” ingredients almost overwhelmed the batter.  They were hard to form into balls for baking but they turned out great.  Almost more of a trail mix snack than a cookie. 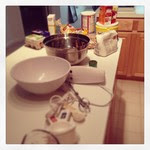 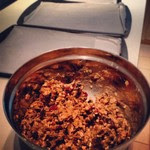 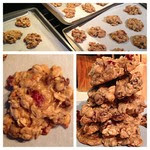 Those were some of the highlights!  Tonight for NYE, I’m going to try a Vietnamese Shaking Beef recipe from the cookbook written by the chef at The Slanted Door in San Fran, where we originally tried and loved this dish.  I’m off to the Asian grocery store to purchase light and dark soy sauce (I had no idea there were different kinds of soy sauce, but I guess that makes sense), fish sauce, rice vinegar and mirin.  I’m excited to see what other exotic treats I will come across there.  Have a Happy New Year!
Follow next stop: tbd on WordPress.com