I totally forgot to tell you who was on my flight from JFK to CDG: Bobby Flay!!!  He was wearing tailored dark wash jeans, a trim button down and narrow fit black loafers.  He wasn’t very tall, but not really short either.  While we were waiting at the gate (me acting like a complete hobo…more on that in a minute), a gate attendant fluttered out from behind the counter, enthusiastically shook Bobby’s (we’re on a first name basis right?) hand and ushered him onto the plane well ahead of pre-boarding.  I didn’t see him again.  But he was there.  Hunkered down in his flat-reclining first class seat/bed I’m sure.  Ironically, the food on the plane was not good.  I hope Bobby brought a snack.

Meanwhile, I had spent the night at a friend’s apartment, and after hitting the gym in the AM, decided to do some laundry.  Unfortunately I was having a time of it with the dryer portion of my washing/drying.  I don’t know if the dryer was just taking forever – being one of those space-saving, energy efficient jobbies, or I had set it incorrectly – if there’s not a normal dial, and I have to fiddle with LED timers that always seem to say 45 minutes no matter how long the laundry has been in, I’m apparently hopeless.

By the time I had to hit the road to make my evening flight to Paris, my clothes were still somewhere between wet and damp. Damn. I even went so far as to try to dry the underwear I had to wear that day in the microwave (oops sorry Graham! Hope you’re not reading this, and if you are…at least they were clean!)  I stuffed the clothes in varying states of mid-way-to-dry in the front part of my suitcase in a plastic bag (aka my hobo bindle) so the rest of my stuff wouldn’t get wet and headed out the door. 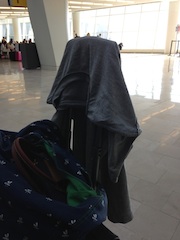 Yes, if you can’t tell, that’s a wet t-shirt hanging over the handle of my suitcase.  Bobby is somewhere lurking in the background.

I then proceeded to wave around various articles of clothing like I was bull fighting, trying to dry them as much as possible.  I got a lot of weird looks and a wide berth.  I had like three tables to myself, as apparently other passengers were loath to approach.

Needless to say, when I got to France, the clothes were still wet.  Maybe a sock had dried.

I met my mom and dad at CDG for a quick snack before my mom caught her plane home (they were coming off of a river cruise that ended in Paris), and my dad and I went to Hertz to get our rental car.  The 40 extra euros to add me as a driver was a complete waste as I ineptly practiced driving the standard shift car in a parking lot for about 15 minutes before giving up.  That’s fine.  I like navigating better anyway.

I set out my wet clothes all over the back seat, and we set off for Honfleur, on the north coast of Normandy.

Honfleur immediately reminded me of the old waterfront of Copenhagen, which I guess makes sense since Normandy was Viking territory for some time. 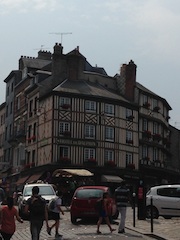 The first of many half-timbered houses we were to see during our trip. 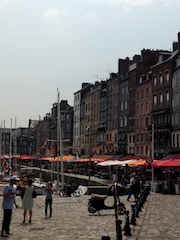 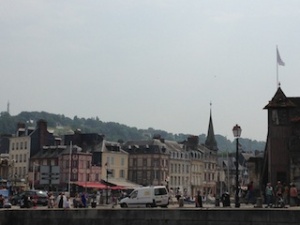 The enclosed port: personal sailboats with tall masts and people lounging on deck, cobblestone streets with many outdoor cafes along the surrounding promenade.  The boat slips are in the middle – strangely like where a town square should be.  We saw the entryway draw bridge rise up to allow a returning boat to enter.  We stopped for an early dinner of moules frites (mussels with fries).

My dad is a big fan of the avant-garde composer Erik Satie (1866-1925), who was born and lived in Honfleur during the end of the 19th century before joining the arts and music scene at Montmartre in Paris.  His home and museum in Honfleur is a tribute to his eccentricity with all sorts of oddities.  Not only was he a piano composer, but he also created various mechanisms to “measure sound.”  His music is intriguing – not classically melodic, but not quite as dissonant as say Stravinsky.

Guests are given headphones with an audio tour of the house including music clips and quotes from Satie more than chronological historical information.  There are sensors on the headsets that note where you are standing in any given room, so to then play the related recording automatically, so you just have to wander at your leisure without worrying about staying on track or on pace with the tour.

In the first room of the house, there were stacks of newspapers and many many umbrellas hanging on the wall. 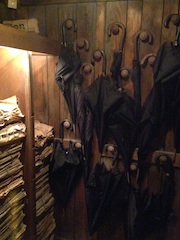 Opposite was a lit pear with mechanical metal wings that slowly flapped up and down. 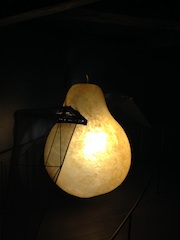 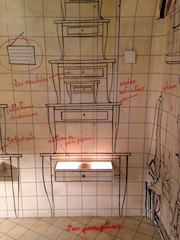 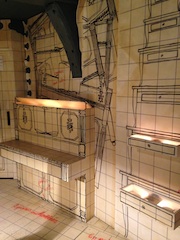 This room’s wallpaper mimics the grid paper of French school children’s notebooks.  Drawers and the piano play between 2 and 3 dimensions.  Satie’s notes are written in red ink on the floor and walls.  The one to the left says 200 umbrellas in French…Satie collected (some might say hoarded) umbrellas (as well as newspapers as noted above). 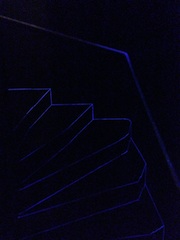 The staircase was outlined in black-light ink. 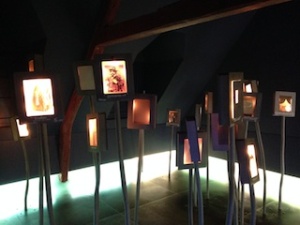 Small lit dioramas created by Satie, some of which had moving pieces.  The way they were embedded at the top of haphazard sticks in a semi-dark room gave an eerie feeling. 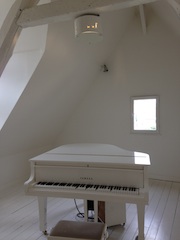 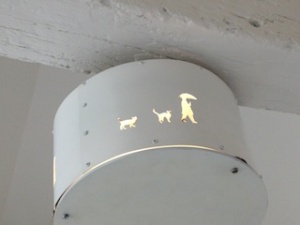 Next, this all white room with a player piano playing one of his compositions.  The light fixture above slowly circled so that different cut out scenes in the shade were intermittently lit.  Here, a man with an umbrella (not surprising) followed by a cat and a dog.

Then it was back in the car and on to Bayeux for the night.