We were out at dinner last week with some friends, when the topic of fairy doors came up.  Completely confused, I rolled my eyes and said, “Excuse me, what?” in my most incredulous voice.

Our friends said, “Fairy doors.  Haven’t you noticed them?”

Me: “I have no idea what you’re talking about.”

Friend: “Some Ann Arbor businesses have a small door for fairies within their regular doors.”

Friend: “Yes, but much smaller.”

Me: “But what if someone breaks in through the fairy door.”

Friend: “They would have to be incredibly small since these doors are only like 3 inches tall.”

Me: “But what if someone uses a crowbar through the fairy door to unlock the main door from the inside or break the door down?”

Friend: “You are way overthinking this.”

With the logistics and obvious security threats addressed….

Me: “Okay, but WHY are there doors for fairies?  I just don’t get it.”

Me: “But there has to be a reason.  I mean, why did it even start in the first place?  Who thought this was a good idea?  Who put them there?”

And back and forth in that vein for a while until I realized we have a thing called Google:  According to the Wikipedia post, the first fairy door was discovered in the home of Jonathan and Kathleen Wright in 1993.  Jonathan Wright is also the founder of the website urban-fairies.com.  Hmmm….”discovered” the doors…right…sounds suspect to me.  Locals, latching onto the idea, have started spotting (building, perhaps?) them all over town, and children leave pennies and other small gifts for the fairies.  One door also apparently has its own guest book!

Here are some pictures of the doors around town.  Last time I passed by, I noticed that The Ark (a concert venue) not only had the door pictured here, but also had a tiny fairy ticket window out front.

At the weekly craft market, I noticed that one vendor sells elaborately painted fair doors in a variety of shapes and sizes.  Another artisan crafted clay restroom doors: one with a picture of a male fairy (I didn’t know there were male fairies) and one with a female fairy.

Okay, I guess I’m convinced that this is a cute idea, and I’ve now found myself compulsively inspecting the baseboards of shops and restaurants to try to spot new doors.  #ways-to-keep-yourself-occupied-when-it’s-freezing-outside-and-you-have-to-walk-to-your-car-parked-multiple-blocks-away

Which brings me to my next point: it is already really cold outside here!  Mark’s parents were in town this weekend and we did a bunch of walking downtown and across campus.  I was going to wear a sweater and the new vest Mark’s parents got me, but I quickly realized that those articles were not going to suffice.  I pulled out what I will refer to as my Baltimore winter coat: double breasted black pea coat from Zara that was my “it’s-cold-but-I-still-want-to-look-nice-not-wear-a-ski-coat coat.”  And it served the purpose this weekend.  However, this is still mid-October.  Panic.  This coat is not going to hold up come two days from now!  Luckily (and by strange coincidence since Mark’s parents were in town) it was UMich parents’ weekend, and Bivouac (an awesome store in downtown Ann Arbor with everything from North Face to Marc Jacobs, hiking boots to Kiehl’s beauty products) was having a sale!  I got a super warm, black down Marmot coat that zips to my knees, features a faux fur-lined hood, and generally looks like a mummy sleeping bag.  Thank goodness…crisis averted (hopefully….I’ll let you know come January).

This weekend we did a bunch of exploring with Mark’s parents.  We went to the Henry Ford Museum on Saturday, where the highlights for me were Rosa Parks’ bus 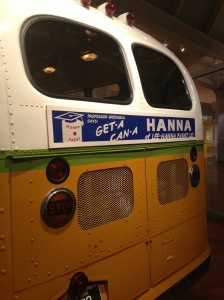 (notice the ad on the back for something called Hanna paint), and various Presidential cars.  They had the car in which JFK was shot, as well as the car in which Reagan was shot.  Here is a picture of Teddy Roosevelt’s car.  I love the lantern-like headlights. 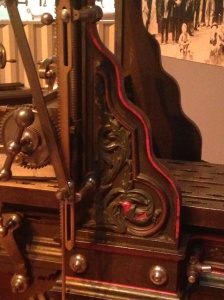 It was noted that Americans used to carve birds and floral patterns into their machinery to make it look softer and less industrial.  This museum clearly has a wide array of exhibits: from cars, planes and trains, to the industrial revolution, furniture design and the civil rights movement.  I thought the layout was kinda hodge-podge, in that there wasn’t a clear path you should take to glean a formulated story of innovation over time.  It was a little bit of this and a little bit of that.  For overall quantity of stuff though, it was impressive…lots of cool things to see all in one place.  And you can appreciate the magnitude of a museum that houses multiple full size trains and airplanes under one roof.  It was definitely a kid-friendly museum with lots of hands-on learning opportunities, including the ability to go up into the engine car of a train and actual-size replicas of airplane cabins from different eras…crazy how small the original passenger compartments were and that at some point along the way the seats were like wicker lawn chairs…not uncomfortable even though they didn’t recline.  Because it was raining, we unfortunately didn’t get to visit the outdoor village that includes famous people’s homes from across the country, purchased, moved and reconstructed here, such as Thomas Edison’s and the Wright Brothers’.

Sunday we went to the Dexter Cider Mill, where we had heard about the handmade warm doughnuts and the freshly pressed apple cider.  We did see them filling plastic jugs of cider out of large metal tanks and smelled the sugary doughnuts being fried and crisp apples piled high in wooden crates, however the line to purchase anything was ridiculously long and there wasn’t much else to do/anywhere else to walk around, so we headed home shortly after arriving.  Oh well…note to self: next time get here bright and early.

Apples up top, remains after cider pressing below

I will leave you with this picture of a local police car.  Every time I see one I just have to chuckle and shake my head in disbelief that these are actual police cars because they seem so cartoonish with the super large single red light on top.  Like an old-timey cop car, or something from “Super Troopers” (which isn’t accurate after Google searching images of the cars in that movie, but you know what I mean….they’re like a parody of themselves).

Okay, that’s it for now….time to tackle to the To Do list for the week….xoxox