Perhaps it’s been too long since I’ve eaten a popover – a light and crispy eggy bread – but I couldn’t remember how it was supposed to turn out, as I set out to bake Martha Stewart’s recipe.

I easily made the batter since it’s very few ingredients: mostly eggs, milk and a bit of flour.

I tested three different vessels: 1. a mini muffin tin, 2. a larger ramekin (small dish) that I typically use for souffles or chocolate lava cake, and 3. a coffee mug. 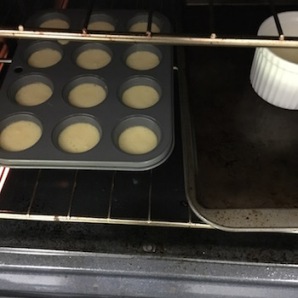 tin and ramekin in the oven! 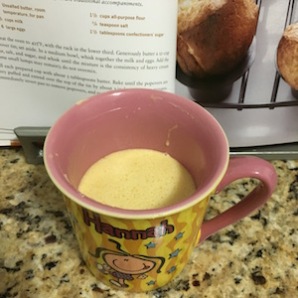 batter in the mug

Let’s start with the most obvious fail: the coffee mug. Remembering that there are all these “mug microwave brownie” recipes floating around, I thought, maybe I can make the popover in the microwave too!

popover coming up in the microwave

The whole thing rose sky high – almost straight out of the mug! But there was no way that it was going to crisp the outside (duh) and the end result was basically a rubbery omelette.

Now let’s move to the not-so-obvious fail: the mini muffin tin. There is a photo in Martha Stewart’s Baking Handbook of the final popovers’ exteriors, but no interior shots. So I thought the insides were supposed to be dry and bread-like, perhaps more like a brioche. 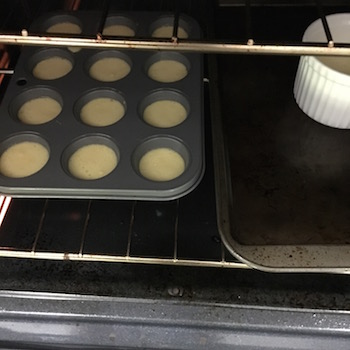 tin and ramekin in the oven!

popovers rising in the oven

out of the oven

I used 1+ tablespoons of batter in each mini muffin cup, and they rose beautifully. When the tops were golden brown, I took them out of the oven and bit into one. It seemed underdone to me. A definite egg flavor, and even though there was the desired hollowness to the center, I wasn’t quite sure if the whole thing was “correct.” 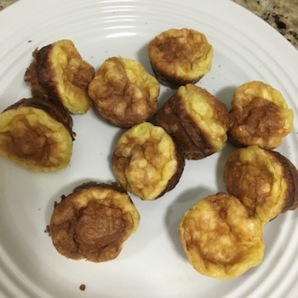 See how eggy they look even here? Like little omelettes!

So I popped them out of the tin and threw them back into the oven on a baking sheet.

Well, if it wasn’t a fail before, it was a definite misstep at this point. The outsides burned and the insides didn’t seem any more cooked through.

Further research leads me to believe that indeed the insides are supposed to be kind of wet-looking. Maybe it was an unexpected success and I just don’t LIKE popovers? Could be. I have a friend-date to go to an NYC restaurant whose popovers she loves – some hands-on research will ensue and I’ll keep you posted!

And then there was the large popover in the ramekin made with 10 tablespoons of batter – double the suggested amount from Martha. I let it bake 40 minutes – 10 minutes past the normal cook time – just to be sure.

The outside looked awesome – toasted and with an odd shape, just like many of the photos in the cookbook and on the internet. The inside was hollow and the dough seemed to be moist but a bit more cooked through, which I appreciated. The downside to this vessel was the fact that the sides and bottom COMPLETELY stuck, even with a liberal butter coating. Hmmmmmm….I’ll have to dig a little deeper here to see what I can do to remedy that. Any thoughts? 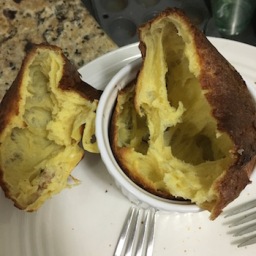 inside of ramekin popover

popover stuck to bottom of the ramekin

I can easily try this out again with some tweaks, given the quick and simple nature of the recipe and ingredients. In the mini-muffin tin, I would probably look to bake them initially a hair longer (maybe 15 minutes instead of 11) to try to dry out the insides a touch. I could also see myself making big ones in ramekins at dinnertime to be served with a roast….once I get a handle on the sticky bottoms.

Popovers to be revisited. Suggestions welcome!