Congratulations to my amazing sister and her long-time boyfriend who just got engaged!!!

I’m so excited that we’re both in the fiance-stage together.  We can conspire and plan and laugh and read wedding mags.  We can do all sorts of stereotypical weddingy things and be super annoying to everyone with constant wedding talk.  Excellent!

Maybe we can even have a double wedding?!?!?

Just kidding.  That would be weird.

Here’s a pic of the lovebirds from our Texas vacation in January:

This ring (which was our grandmother Honey’s) looks amazing all polished up and fitted! 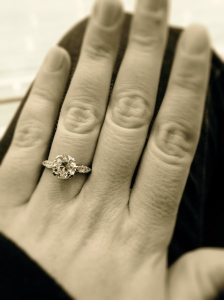 I can’t believe she didn’t see it coming.  Her fiance called me back in December to conspire about getting to Baltimore to ask our parents’ permission formally and to discuss when he was going to pop the question.  Good thing our parents were on vacation for much of January so that they didn’t have to keep the secret in frequent phone conversations.

I felt like I was giving it away left right and center.  When we went to the bridal expo in January, I signed us both up as brides saying we could both get the bride-swag (which was disappointingly none).  When we were out at dinner, I mentioned that I had recently watched our grandparents’ wedding video, and when my sister asked why she’d never seen it, I said, Are you sure? I know your boyfriend’s seen it.  He gave me the death stare across the table, knowing that he had seen it when he made the secret trip to Baltimore to speak with our parents.  Oops I had forgotten those circumstances.  We quickly covered it up by saying that we were mistaken, that it was actually her Bat Mitzvah video he had seen.  She got up to use the restroom and he just about strangled me (good-naturedly of course…I hope).  When she got back, I think it was forgotten.

I was also suspicious that she may have been anticipating the proposal because it seemed like she was getting her nails done an awful lot recently.  Maybe that’s typical and I just don’t know.  Or maybe she was sprucing them up to gear up for showing off her hand constantly.  😉  No, it does sound like she didn’t see it coming, at least not in the moment, so that’s super cute and exciting.

I’m so so so so happy for her, I can’t stop grinning 😀

4 thoughts on “A Second Engagement!!!”