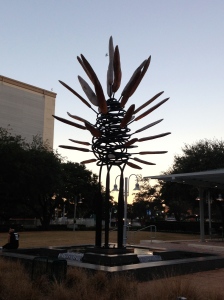 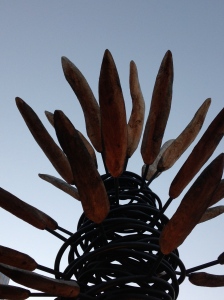 Close up you can see these pine-coney spikes are made of beautifully smooth amber-colored wood.

We went to The Pastry War in the Market Square neighborhood, a new(ish) tequila bar that is getting some hype (read about upcoming tastings on Eater.com) because they are holding cocktail classes led by the award-winning bartenders at Anvil, another Houston bar, which made Esquire magazine’s best bars for 2012 (but which fell off in 2013 much to the chagrin of some local publications).  It is also one of many new bars and restaurants opening in the area hoping to revitalize the neighborhood.  It was a really cool little part of town, and I highly recommend checking it out.

Sort of hidden bar, as this was the only signage at the front.

We only did one pre-dinner drink at The Pastry War, but I would love to go back to Market Square to make a night of hot-spot hopping and people watching.  Here, a margarita on the rocks made with mezcal (from agave like tequila only smoky like scotch).  I’m really liking mezcal right now; I got a delicious concoction at Isalita, a Mexican tapas restaurant and ultra-cool night spot in Ann Arbor, which turned me on to it.  At The Pastry War, it was definitely a different twist in a tart limey (what one might consider refreshing) margarita, and I think I’ll stick with regular tequila in my margaritas. 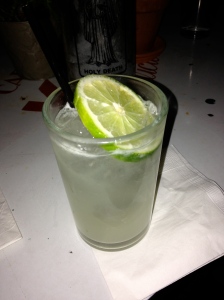 Walking in through the outer seating area

Obviously into the mezcal here

Agave plant memorialized as a single tile embedded into each table

Behind the bar: some unusual taxidermy

A cozy corner of the bar with bric-a-brac 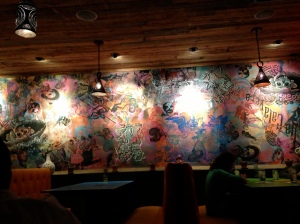 Skull motif on the ceiling

Looking out to the outer seating area

Some other photos from the weekend:

Ugh, this is what you get for running across the street with your sunglasses tucked in the V-neck of your shirt.  I wasn’t about to dodge back into traffic to try to retrieve the lens before it was run over.  And this is why I don’t buy expensive sunglasses.  Bye-bye.

A delightful lunch at Tiny Boxwoods (extremely popular restaurant attached to a plant nursery) with my sister.  When we arrived, there was a line out the door (you order and then they bring it to you at your table) and all the tables were full, but they were closing soon, so I held down two seats at the bar, while my sister stalked an outdoor table for us: success!!  White wine mojito for her and straight Pinot Grigio for me.  Along with my “French picnic” platter and the sunshine, it was a perfect afternoon.

Ugh again: This scared the sh** out of me in our hotel bathroom the morning we were set to leave.  Still gives me shivers.  Is this a roach?  I have no idea, but it’s disgusting.  I had called for a late check out, but once this was spotted and trapped under a cup, I got the hell out of there ASAP.  Something to be said for the winter chill in Ann Arbor I guess.

1 thought on “First Time to Downtown Houston: A Weekend In Pictures”